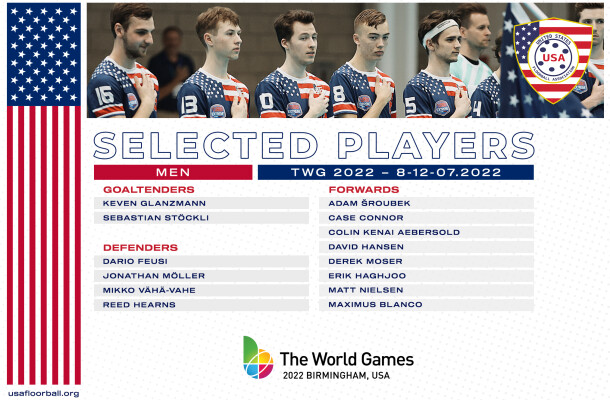 We are proud to be able to announce the players that will be representing the red, white and blue at the World Games in Birmingham, Alabama, this summer.

Between the 8th and the 12th of July floorball will take center stage at the World Games in Birmingham, Alabama. This huge multisport event is a short step away from the Olympics and a dream come true for any athlete.

Now we are finally able to reveal with players made the cut for Team USA.

“As always it was hard to pick a team from a lot of talented players that want to represent team USA. But we are confident in the team we picked to represent USA in Birmingham. This will be the biggest floorball event in history in North America and we are really excited to go out and face the best teams in the world,” says head coach Joel Olofsson.

Team USA have been placed in group B with Finland, the Czech Republic and Canada. While group A consists of Sweden, Switzerland, Latvia and Thailand.

Team USA will begin the World Games with a game against the Czech Republic, that took home the bronze at the last World Floorball Championships. The game will start at 6:45 p.m. local time on Friday the 8th of July.

“The World Games is immensely important for floorball as a whole and the USA Floorball community. We hope everyone that can make their way to Birmingham and show their support. If not live then via any streams possible and through social, we need all of the American floorball community behind us to take advantage of having all the best floorballers in the world in the states,” says General Manager Adam Troy.

You can find complete information as well as the game schedule on the IFF site here.

You can buy tickets to floorball at the World Games here.