Men's Under-19 Team Announced for WFCQ

Men's Under-19 Team Announced for WFCQ 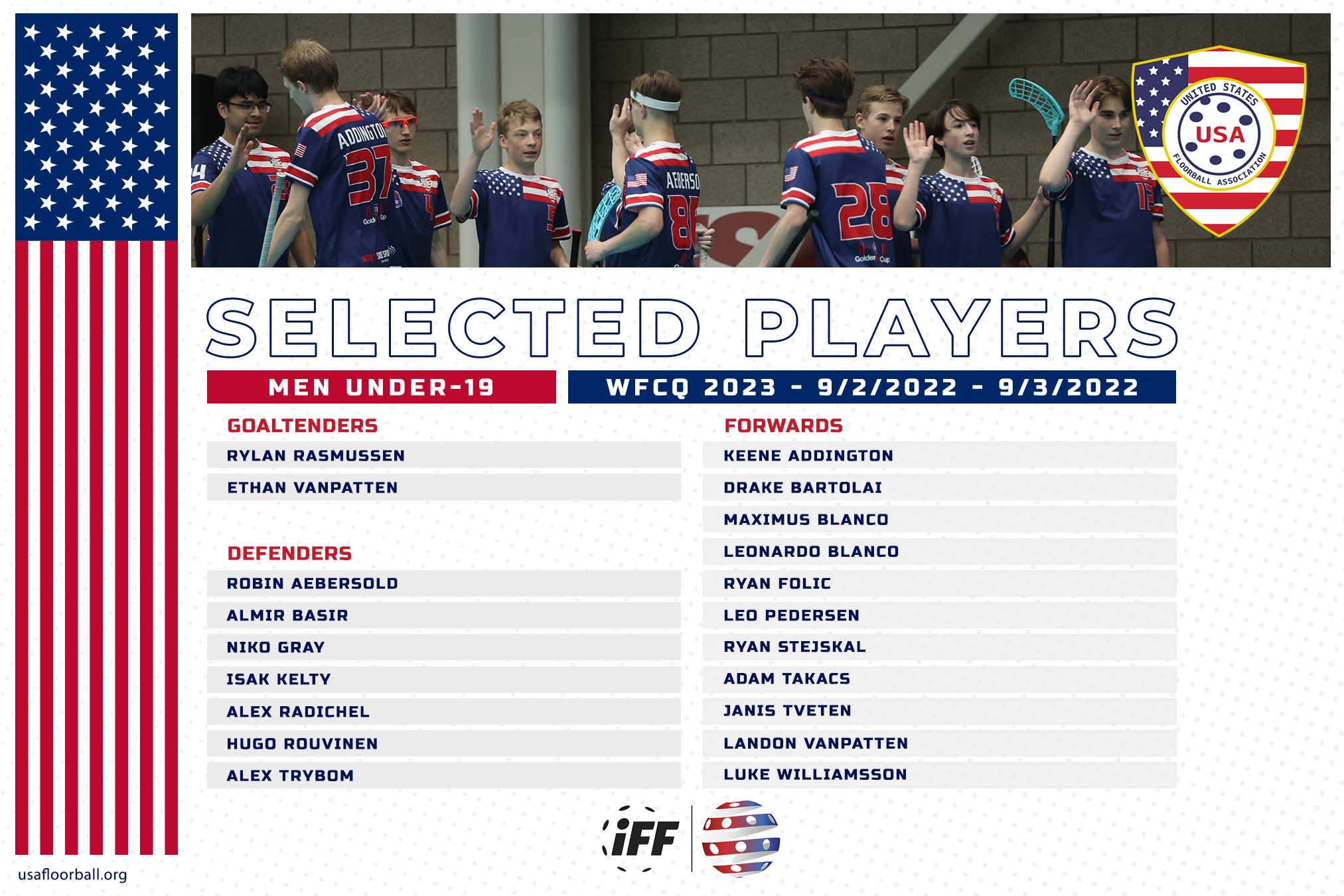 USA Floorball today announced the team for the Men's Under-19 qualifier for the 2023 World Floorball Championships.  The WFCQ will be held in Draper, Utah, just south of Salt Lake City, on September 2nd and 3rd in conjunction with the US National Championships.  The US will face Floorball Canada in a two-game qualifier, with the winner determined by the combined aggregate score of the two matches.

The US team is the product of three years of hard development work by the entire American floorball community.  For the first time in recent US MU19 history, there was a solid core of players to choose from, most of whom had played together before in many tournaments.  Historically, the American teams have not had significant time together before an event.  Virtually every member of this team has played at least one national tournament together, and confidence in the club is high.

Brian Radichel, General Manager of the Men's U19 program, said, "We've spent the past three years since our loss to Canada in Halifax working towards a consistent core of players that play together many times a year.  This year's roster features four prominent US clubs:  North Texas, Orlando, Chicago, and Utah.  Thirteen players, including both our goalies, have spent time working together to get ready for this event.  We're very proud of this roster and the progress US Floorball has made in the last three years."

To season the roster with experienced Euro-based Americans, men's team member Maximus Blanco and his brother Leonardo join the team from Sweden, where they play for IK Sirius.  Isak Kelty, who captained the U19 Development Team at this past spring's Texas Open, returns to the States from his club Salems IF.  Robin Aebersold, whose older brother Colin represented the US Men at The World Games, returns as well from his Swiss club Jona-Uznach.  Rounding out the team are Leo Pedersen from Lindas Waves (Sweden), Ryan Stejskal from Panthers Praha (Czechia), and Alex Trybom from KAIS Mora (Sweden).

In all, three members of this roster played with the US Men in May for the WFCQ in Texas:  Keene Addington IV (Chicago Dogs), Maximus Blanco (IK Sirius), and Alex Radichel (NTFA).  This makes this U19 team one of the most experienced and talented that USA Floorball has ever been able to field.  "I have coached these players in different configurations from Y16 through multiple tournaments and camps over the last few years in an effort to prepare a great team for U19 and beyond," Daniel Williamsson, Assistant Coach and Y16 General Manager, said.  "I have been truly impressed by the accomplishments in these tournaments and how the players have developed.  We have never had such a great pool of homegrown players to choose from and I believe the team we have picked will be very competitive.  I am proud of what we have built and the future looks bright for USA Youth Floorball."

The WFCQ matches will take place at Sport City Utah in Draper, UT.  Game time for both matches is 7pm Mountain time.  Follow us for streaming information as we get closer to this great event!

The final roster (with club):