Canada advance to the WFC!

Canada advance to the WFC! 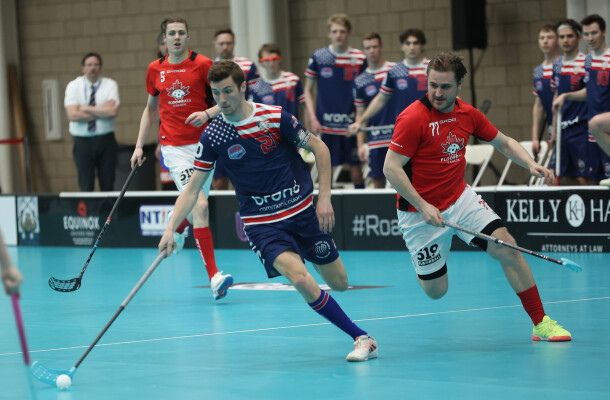 After the score of 1-4 to Canada and 4-4 Canada win the WFCQ and are set for the WFC in Switzerland.

The first game of the WFCQ was initially even but in the second period Canada was able to score twice before USA was able to get on the board through Maximus Blanco on a pass by Colin Kenai Aebersold.

Just as Team USA was getting momentum and threatening to tie the game Canada’s Jonathan Kuysten scored two. The final score for the first game was 1-4.

This meant team USA had to win by three in the second game to take It to overtime or by four for an outright overall win.

But the second game started disastrously. Canada scored three unanswered goals in the first period. Team USA can out as a totally new team in the second and the home crowd went wild as US scored time after time and suddenly the game was tied at three.

USA was able to score yet again, giving the team a 4-3 lead. But having to win by three for the overtime team USA took out their goalie and put the pressure on! But Canada where able to score in the empty net and the final result was 4-4.

You can find stats from both games here.

Good luck to the Canadian team, we will see you at the World Games!